Between zero and four of the following accounts are true. 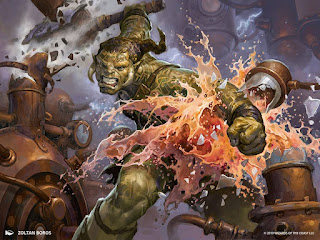 In a realm long lost to time, there once lived an acharya. The warrior-students of his monastery were competent and respected, but they never found excellence as their peers did. At every monksmoot, the acharya would stand and watch his warriors strive, falter, and fall. For years he sought a cure, some secret technique or stylistic heresy that would bring victory. One night, beneath a blood moon, he fell to his knees and cried out to Jasvinder, the hero-god of competition and triumph, for aid. And Jasvinder, finding mortal need in his words, answered.

The warrior-students, They decreed, would be blessed with the strength of many, their fists imbued with shattering power unmatched by any monastic champion or wandering guru. But Jasvinder's blessing came with a stark warning: the monks must show humility and good sportsmanship in whatever success they might find.

Some theologians argue that Jasvinder had high hopes for Their chosen acolytes. Others contend that They, like any hero-god, had perfect knowledge of Their domain and knew full well that the warriors, unused to such victories and desperate for recognition, would fail. Either way, fail they did, and Jasvinder's punishment was instant.

With every cruel boast and every thoughtless jeer, the warriors found their bodies twisting, muscles bulging grotesquely to reflect the brutishness within. The hoh garr, the Swollen Ones, became the scourges of tournaments across the realm, and the asharya could only watch as his trusted students spiralled deeper into monstrousness in pursuit of conquest. The monasteries of old are long gone now, but the hoh garr bred true, and their descendants have followed the same path of glory through callous violence ever since.

1d6 Secret Techniques
1) Walk up walls and on ceilings. Must end movement on a flat surface.
2) Project attacks out to a 15' range.
3) Catch arrows, negating ranged attacks unless distracted.
4) 1/round, touch or punch acts as a targeted dispel magic.
5) Precognitive. No-sell one attack or hostile spell per fight, after damage / Save rolls.
6) Free auto-hit 1d4 bite attack with the first successful punch each round.

Manner: Both arrogant and extremely insecure. Hypercompetitive with each other, and desperate to prove themselves against anything else. Diplomacy is tricky, as they've forgotten how to converse without trash-talking.

Tactics: Disciplined, even mildly honourable, until they start losing, at which point all dirty tricks are on the table. In theory, they fight to incapacitation or surrender, but they get carried away easily.

In a realm long lost to time, there once lived a sage. Her field of expertise was the bold new frontier of vapourcraft, clouds of millions of tiny motes of matter directed as one. These new vapours had found use in construction and warfare, helping the Sophocracy conquer her neighbours, but her ambitions were directed inward. If these tiny miracles could change the world, could they not change the body too - and perhaps even improve upon it?

Hundreds of volunteers were called down into the sage's sanctum as she tested and iterated. Few emerged intact, their lives and souls burnt as fuel for the engines of creation. But, at last, she captured the basic recipe for life in a swarm of dust particles, and infused them with the energies they would need to manifest that recipe. She named this living, glittering dust the Rain of Creation.

From a tiny sample of human flesh and an ample supply of lesser tissues, the Rain of Creation could spin whole new beings, made in the image of humanity but, as the sage saw it, improved. They towered over their progenitors, and their strength and stamina were vastly improved. But the sage had committed accidental blasphemy, for the Rain had corrupted the organ the Sophocrats held most sacred: the brain. The "rainfolk" could think, learn, and remember like humans, but their creative power was all but destroyed. They could not innovate.

For her crimes, the sage was driven into exile and her project dismantled. A few of her children escaped the subsequent purge, taking with them samples of the Rain of Creation and enough notes and schematics to give them a measure of control. They became the first Rainherds, and little by little they spawned enough of their kind to pass their knowledge on and sustain their population.

Unstable: Without the constant passive attention of the Rain of Creation, an ogre cannot heal naturally and loses 1d6 hit points per day.

Raincraft: Instead of attacking, a Rainherd can use their command staff to direct the Rain of Creation with a range of 60'. They can direct it to deal 1d6 automatic damage to a living creature, heal a living creature for 1d6 hit points, or do a simple manual task with the efficiency of one normal human. Damage dealt by the Rain bypasses most forms of damage resistance. The swarm will repeat the task on the Rainherd's initiative count until it's directed otherwise. It falls dormant immediately if the Rainherd falls unconscious or loses possession of the staff, or if the staff is broken.

Manner: Wooden and joyless, like washed-up actors. Their desires - food and security, mostly - rule them, but they pursue them only because they always have. Some clades can negotiate; others have never thought of it, though they could be convinced.

Tactics: Ogres don't hesitate to fight, but don't seem to enjoy it very much. They can't develop novel strategies, so they stick with simple, proven winners - they flank wherever possible, and are surprisingly stealthy.

In a realm long lost to time, there once lived a revolutionary. He had been a humble priest once, before the coup; now he was an outlaw, watching from the shadows as his former parish sweltered under the witches' yoke. Their grip was tenuous, and he knew a counter-revolution was inevitable, but how many might die in the meantime? He could wait no longer.

The revolutionary was a skilled occultist, and his tomes of holy lore had survived the witches' raids, hidden in a false chamber-pot. He rallied his flock in the abandoned mine outside town, shielding them from flying patrols, and, night after night, they hatched plans and made preparations. On the feast day of St Eliodoro, the people of Ogrov gathered one final time in the ruined chapel, and, when they emerged to face the sheriff, the power of angels coursed through them.

The farmers and fishers of Ogrov had become mage-bane shock troops, bodies bulging and overflowing with holy strength. The sheriff and her deputies flung every curse in their arsenal, but the spells exploded into sacred flame before they could find their marks. The peasants' advance was not slowed, and they cut the officers down where they stood. The Battle of Ogrov had only one casualty for the rebels: the revolutionary himself, the seed of their liberation, slain by a panicked shot from the sheriff's crossbow. In his memory, his faithful comrades produced thousands of pamphlets and scattered them to the winds, and, the following St Eliodoro's Day, villages across the realm raised their own companies of "Rited".

The Restoration is now little more than a historical curiosity, and the Rite of Ogrov is outlawed in civilised lands. Still, every so often, an Ogrov Pamphlet will find its way into the hands of some fundamentalist sect or heretical noble, and a fresh band of zealots will rise in the countryside, usually turned to far darker, earthlier ends than freedom and justice. The Rite is costly and permanent, but, spelled out as it is in the Pamphlet, it's not difficult.

Curse-Pyre: Whenever an ogre is hit by a magical attack or fails a Save against a harmful spell, the effect is negated, and a burst of holy fire deals 1d8 damage to everything within 5', including the ogre (whose fire resistance applies normally).

The Rite of Ogrov: At dawn on St Eliodoro's Day (early summer), gather up to 30 people on consecrated ground and have them burn their worldly possessions, including clothes, in a huge central pyre, while a priest (who is not affected) chants the Psalm of Renewing Flame. The pyre must burn continuously from sunrise to sunset. At dusk, each subject is transformed into an ogre, then takes 4d8 damage, which may kill them.

Manner: Their past selves, after several years' cult indoctrination. Sinners are to be shunned and despised, everyone else is disposable at best. Single-minded, but smart enough for the mental gymnastics needed to justify extreme violence against almost anyone.

Tactics: Direct, brutal assault against sinners, fear and suppression against anyone else in their way. Dusk is their favourite time to attack, lighting up the night sky with the fires they start.

In a realm long lost to time, there was once a gardener. She worked on a noble's estate, and was well-liked by the other servants for her wit and kindness. And she liked them back, for the most part, even the ones she killed. The disappearances vexed the staff, certainly, and she was always there to comfort them after a loss, but inevitably the duchess would hire a replacement, and marvel at how beautifully her garden grew.

One year, a trader from a distant land sold the gardener seeds for a new breed of flower, a magnificent rose with petals of deep crimson. The seeds were from the land of the fae, the trader explained, and would grow tall and strong no matter the weather. The gardener put little stock in the story, and simply planted the seeds, fertilising them, as she usually did, with her own specially enriched compost.

But the land of the fae is a land of extremes. Just as it can bring forth extraordinary beauty, so too can it beget extraordinary cruelty and ugliness. Touched by the souls of the gardener's victims, the seeds turned sour in the earth and grew like weeds, spreading across the garden, collecting the fear and resentment of the dozen other bodies she'd scattered across the beds.

The gardener vanished one day in the winter, and was mourned by all. As they noticed the other disappearances stopping, the staff buried their suspicions, just as they had buried their questions about the gaping hole they'd found in the flowerbed, the bloodstains on the pathway, and the unearthly howls some of them had heard that night. By the time a new gardener was hired, the original was sinking into the earth miles away, feeding the progeny of the awful thing she had created.

Thorns: A melee attack that misses an ogre by 1-3 deals that much damage to the attacker.

Manner: Utter avenging hatred of humanity, punctuated only by schadenfreude. They howl in voices made of half a dozen dissonant screams, but can't speak intelligibly. They won't harm merchants.

Tactics: Ogres fight like serial killers, always attacking from hiding and isolating targets as soon as they can. They will usually drag off sufficiently weakened targets rather than killing them outright.

Email ThisBlogThis!Share to TwitterShare to FacebookShare to Pinterest
Labels: bestiary