I've been doing a lot of design by subtraction recently. OLOG's main mechanical trick is that it does away with variable ability scores - there are still some calculated stats like Defence and Save values, but instead of Strength, Intelligence, Tastiness etc., you have Virtues.

What else can I tear apart and rework? I put most of this together on my lunch break. (This isn't going into OLOG, I just wanted to get the thoughts down.)

Pain is real, tangible harm, like getting hit with a weapon, fireball, or death curse. Lesser injuries might hurt or inconvenience you, but are not classed as Pain.

Creatures have a pain threshold (T). 1 is puny, 5 is hardy. Most humans have an innate Threshold of 3.

When you suffer Pain, roll a d6. If it exceeds your Threshold, you die. 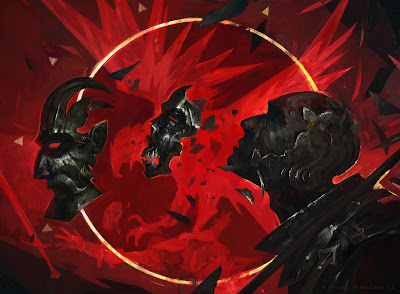 If you'd rather not risk death every time you get hit, you big dirty coward, there are ways to protect yourself.

A Ward is something that can save you from Pain - think of it as sacrificial armour, something you can wager instead of your life. Here are a few things that serve as Wards:

Whenever you suffer Pain, you may invoke a Ward to change the stakes of the die roll. Instead of wagering your life, you wager the integrity of the Ward, and roll against its threshold rather than your own. If the d6 breaks the threshold, the blow is still absorbed, but the Ward is disabled and can't be used again, though it may recharge if some condition is met.

Most Wards are not universal - there will be some sources of Pain against which they can't be invoked.

Attack rolls and Defence are still assumed to be a thing.

Without variable damage dice, we need a new way to handle weapon power. Particularly powerful weapons could be represented in a few ways - powerful attacks could have a penetration value that reduces the threshold of physical Wards invoked against them. With this in mind, Wards could well have thresholds higher than 5. These Wards never fail under normal conditions - you'll need a penetrative weapon to break them.

Especially nasty attacks, like dragon breath and killing curses, could potentially cause multiple rolls' worth of Pain, either to single targets or spread out across a group. You can't use the same Ward more than once against the same attack.

I'm still not sure how to handle body armour. It could be a simple Defence buff, but that feels against the spirit of the system. It could be its own Ward, but having a whole suit of armour fall apart to a single decisive hit feels silly; I considered armour having a degrading threshold (it gets worse as you take more hits) but that's a bit too fiddly for my tastes. My current, provisional ruling is that armour increases your personal threshold, but is subject to being partially or fully ignored by penetrating weapons - maybe it's like

Nonlethal attacks work the same as lethal ones, but the failure condition is "you're unconscious" or similar rather than "you die".

You might also be able to attack some Wards directly if you want them gone. If successful, this forces a roll against that Ward, rather than the target getting to choose.

The anti-priest Arlene, hastening home to her safehouse, feels her heart sink as hoofbeats echo behind her. An errant Stag-Knight is tailing her, no doubt seeking the bounty on her head.

As a straight fight, this isn't looking good for Arlene; her magic is almost spent, and she doesn't have a weapon powerful enough to be of use against chainmail. She'll need to be smart to have a chance of survival.

Arlene turns on her heel and draws her bow, taking a potshot at the approaching Stag-Knight. The arrow finds its mark, so now the Stag-Knight faces Pain. He chooses to invoke his shield, rolls a d6, and gets a 3, not enough to break his shield's threshold of 3. The arrow buries itself deep in the wooden board, but the shield holds

The Stag-Knight dismounts as he reaches Arlene and draws his sword, ready to cut down the infidel before him. His swing connects, so now it's Arlene's turn to face Pain. She invokes her meagre grit, figuring she'll need as many extra chances against this foe as she can get, and rolls a 3, enough to break her grit threshold. She ducks beneath his hopeful high swing, but it's close.

With her grit disabled, Arlene has no Wards left, and any blows that land on her now will be potentially deadly. She drops her bow and makes a show of drawing a blade of her own, teeth gritted in desperation. The Stag-Knight watches her sword arm with fierce focus, and doesn't catch the subtle swell of violet-edged darkness coiling around her other hand.

She slams her left hand into the Stag-Knight's flank. Castigate is a potent curse, inflicting two separate Pains. The Stag-Knight wasn't expecting this attack, so he can't invoke his shield again; he invokes his grit against one Pain, but can't use the same Ward twice against a single attack, so he has no choice but to suffer the other directly to his body.

He resolves the first Pain against his grit, and rolls a successful 2, but it doesn't matter. The second, resolved against his body, rolls an unlucky 6. The sweet, calculated words of Him Below flow through the Stag-Knight's body like molten iron, and he collapses, steaming, to the ground.

Arlene catches her breath and retrieves her bow. Having had a moment to recover, her grit recharges - should she get into another fight, she'll be able to use it again. But no amount of grit can protect her from her patron. The castigate that felled the Stag-Knight used more of His power than she's earned, and the accountants Beneath never sleep.

It makes combat scarier, and gives me interesting dials to turn, to make characters tougher in different ways. Heavy armour, hard-won fighting experience, and magical protection can all impact a character's toughness, and they can do so in different ways (increased personal threshold, increased grit, and a whole separate Ward, respectively).

It is also badly in need of refinement and testing, but getting the ideas out early can't hurt!