[GLOG] The Hound of the HIGHEST

Evil smells bad. Everyone knows this - from putrid corpse-scent to the heady reek of pestilence (which is, of course, spread by corrupted air), the works of Him Below leave a foul miasma on the world that offends the senses and disquiets the soul.

What some don't realise is that it's not merely the products of wickedness that leave clues in the air. Sin itself has a smell. The five Mortal Transgressions each leave their own distinctive marks upon the air, too subtle and insidious for the untrained nose. With practice, though, they are all too easy to sniff out.

The Hounds of the HIGHEST are a loosely-knit holy order separate from the three great churches. Their senses of smell are finely attuned to the evils of the world, and, to hone it, they must spend time bathing themselves in that same wickedness, thus their high attrition rate for new recruits and their terrible reputation among more conventional clergy. Still, those who can brave the Transgressions and come out with their faith intact are investigators without compare. Tannists, Venerables, and Absancts alike spurn the Hounds in public, but every bishop worth her salt knows when to call for their aid.

Some grow tired of serving the churches, though, and decide their talents would be better used elsewhere, in the dark, forgotten places of the world.

These are their stories.

Demi-Class: Hound of the HIGHEST 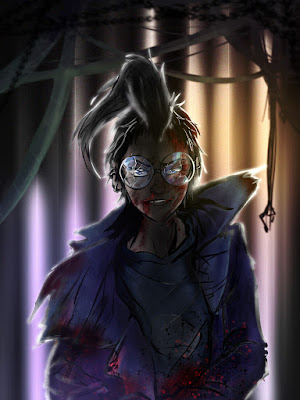 For each Hound of the HIGHEST template you possess, you gain +1 Initiative as long as you have a functional sense of smell and your enemies have a scent, however slight.

A: Heaven Scent, Lingering Stink
B: Whiff of Suspicion, Burn Out the Stench

Several of the Hound's abilities rely on smell. These abilities are not magic and can't be dispelled or blocked by antimagic effects, but they can be foiled by strong mundane smells like perfume or dung.

You can trace scents up to a week old, and discern when they're more than a day old.

A: Lingering Stink
Even successful Hounds have a hard time getting through training without falling into a few bad habits. When you gain this ability, roll 1d6 for a bad habit - 1) binge drinking, 2) narcotics, 3) gambling, 4) meaningless sex, 5) petty theft, 6) brawling. If you've indulged your bad habit in the last week, for no reason other than feeling the buzz, you gain a +2 bonus to all saves and heal 1 extra hit point with lunch. If you haven't, invert these bonuses.
This habit also gives you a constant miasma of low-level vice. It doesn't interfere with your abilities, but it does mask any greater Transgressions you might have committed, such that other Hounds and similarly trained people can never detect them.

B: Whiff of Suspicion
You can now trace scents up to a month old, and discern when they're more than a week old.
You can spend a round adjacent to a Transgressive Object to commit it to memory. Note down its nature and Transgression, such as "Darius the blacksmith - Witchcraft" or "the Eleventh Legion's lost pay chest - Theft". When you smell something connected to the same acts of Transgression, you will recognise the link; you'll know, for example, that Darius' familiar is linked to him (beyond simply being an Accessory to Witchcraft), or that the bandit camp on the Caul Road is associated with that stolen pay. You can retain only three memories at a time this way, and may drop them at any time.

B: Burn Out the Stench
You gain an extra attack per round which you can only use against creatures you've identified as Transgressors or Accessories.

The inspiration for this class comes from all over the place, but the trigger was an episode of Leverage, of all things, the one where they fake a miracle to save a church from being shut down. There's a minor plot point about the Vatican sending investigators to verify the miracle as legit, and the second thing this made me think of was whether it'd be cool to play one of those guys. (The first thing was the Monty Python "Church Police" skit.) The first version of this class was based around being able to discern whether magic was real or fake, but I realised pretty quickly that it would be very limiting, and had a think about what else church investigators might do. The other inspiration point was the running theme in many GLOG denominations of wizards being able to taste magic. What if priests had a similar sense, one more aligned with their identity? What if they could smell sin?

The Hound of the HIGHEST was originally going to be a full class, but my attempts to extend it to C and D templates felt like a stretch somehow, like I was overextending an already pretty limited idea. That said, I think I like it as a half-class. I figure the Hounds probably aren't close-knit enough to have all that much consistency between them, and we should have more half-classes regardless, since ease and simplicity of multiclassing is one of the GLOG's biggest strengths. Fill out your other two levels with some sort of thief if you want to stress the "holy scoundrel" angle, a different flavour of priest for some actual miracles, or a fighter class for a scent-based Punisher type.

I really need to write up more about the assumed theology behind my classes at some point.