In eras past, in the distant heights, the mountain kingdoms declared war on heaven. Keen to weaponise their strong bardic tradition, the people of the heights sought new instruments of war. Drums and bugles were all very well for rallying troops and cowing mortal foes, but they needed something more, something that could drown out a choir of angels and reduce a thrice-blessed bulwark to rubble with a single note. 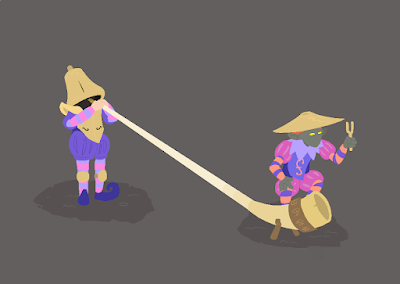 Art by the talented and handsome K25fF - thank you!

You and your trusty cohorn are alumni of the Warchestral Academy, trained in the care and operation of a Contradivine Ur-Horn. Despite aggressive funding in recent years, the modern public sees bardtillery as quaint and archaic, and your promised places in the army vanished the moment you graduated. At least they let you keep the horn. They were probably too scared to take it off you.

A: Ur-Hornist
Your Ur-Horn is 12' long, made from heavily treated wood and various enchanted metals (it detects as magical), and extremely heavy. The Ur-Horn takes up a total of 12 inventory slots, but the burden can be spread among up to four people moving together. It is indestructible by anything short of direct divine intervention. It's also irreplaceable, so don't lose it. Deploying the Ur-Horn for combat or stowing it takes one full round, shortened to one action if your cohorn also takes an action to help; it cannot be moved while deployed, but can pivot around its mouth.
The Ur-Horn demands impeccable breath control. You have a stock of Breath Dice, or BD, which are d6s, representing your reserves of stamina and lung strength. Depleted Breath Dice are restored after a night's rest.
When you spend a round doing nothing but aiming and blowing your deployed Ur-Horn, you can invest any number of your BD, rolling them. If you roll a 5 or more on a BD, it's depleted after use. If any two BD results match, all rolled BD are depleted after use.
The base effect of the Ur-Horn deals [sum] sonic damage in a 5x[dice]' radius sphere centred within 300' and line of sight, with a Save for half. This can be altered by Harmonies.
You can also use the Ur-Horn to play deafeningly loud music of decent quality. This doesn't cost any BD, and is audible up to 10 miles away per Bardtillerist template you possess, terrain permitting.

A: Cohorn
You are accompanied by a cohorn, a lower-ranking bard who is nonetheless a skilled sonic engineer in their own right and vital to many of your abilities. Name and briefly describe them. They are a generic 1HD hireling, of the same race as you, with no equipment save what you give them. Your cohorn costs no upkeep and doesn't count towards your hireling limit. They trust you with their life - they need never check morale if they can see or hear you, but automatically fail morale checks if not. Cohorns always follow the same rules for death and dismemberment as PCs.
When you play your horn, your cohorn can spend the round assisting you by checking ranges and frequencies, adjusting the Ur-Horn's valves and enchantments, and offering moral support. When they do, before rolling BD, choose and apply one Harmony they know to the usage.
If you lose your cohorn, you can replace them only by spending time on a mountaintop, doing nothing but eating, resting, and blowing your Ur-Horn; one will answer your call in 1d3+4 days.

B: Sundering Resonance
You can now use your Ur-Horn out of combat to deal massive damage to stationary, inanimate objects, vibrating them into packed but easily workable dust. Invest your BD at the start, blow for ten uninterrupted minutes, then roll the dice and pulverise [sum]+[dice] contiguous cubic feet of material (doubled for wood, halved for most metals, impossible for lead or enchanted material).

C: Torrent of Sound
When you blow the Ur-Horn after blowing it the previous round, gain +1 to each BD roll. This is cumulative as long as you keep blowing.

D: Unison
You can now apply a Harmony to your own use of the Ur-Horn, in addition to the Harmony your cohorn may contribute. The two Harmonies must be different.

What if a military weapons team had an alphorn instead of a machine gun?

The Bardtillerist's toolkit is perhaps more robust than a standard wizard's, only losing dice on a 5+ or a mishap and suffering no other penalties for mishaps. My hope is that they pay for this in awkwardness. The Ur-Horn takes time to set up and tear down, you're very limited in what you can do with it, and you need the help of a fragile, difficult-to-replace ally to get the most out of it.

One night's work. Probably needs refining, but I absolutely had to get this written down the moment the idea struck.

Email ThisBlogThis!Share to TwitterShare to FacebookShare to Pinterest
Labels: glog